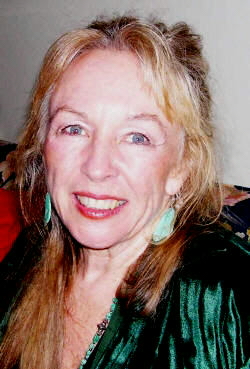 Vijali Hamilton is a visionary artist and meditation teacher. Over one thousand of her artworks are in museums, public places, and private collections. She gives seminars and retreats on meditation and the creative process, internationally and at her World Wheel Center Retreat outside of Santa Fe, New Mexico. Vijali spent ten years as a monastic member of the Vedanta convent in Santa Barbara. A Masters in Fine Arts from Goddard College, she is a fellow of the World Academy of Art and Science.

For the past thirty-one years, Vijali Hamilton has worked and taught around the world as an artist/peacemaker. She collaborates with diversified communities and utilizes her skills as a sculptor, filmmaker, poet, musician, and author. Vijali started her World Wheel Project in 1986 to further explore the role that community-based art can play in building a world at peace.

Vijali’s first World Wheel project was a seven-year spiritual and artistic pilgrimage during which she circled the globe on the 34th latitudinal parallel creating monumental stone sculptures and community-based ceremony performances in twelve countries. Some of the countries were the Middle East, India, Tibet, China, Siberia and Japan.

In 1999 she began the second World Wheel, Global Peace through the Arts. The first sites are the Andes and the Amazon of Ecuador, Senegal Africa, Australia and the Republic of Georgia. In the course of this second World Wheel, she established a World Wheel Project for the Homeless Youth of Los Angeles.

Vijali’s latest books: World Wheel, One Woman’s Quest for Peace, Of Earth and Fire (poetry and art), and Liberty: Enlightening the World (poetry and art) and her feature film, Wheel of the World, One Woman’s Creative Journey for Global Peace are available through www.amazon.com and her website www.worldwheel.org.