I am delighted to announce that the World Wheel Project and the Ancient Ways Project will be collaborating in our respective work. We are hoping that the first site will be in Ladakh this coming summer, in the high Himalayas of northern India. I will be continuing to create sculptures in the environment and move toward making stone altars for peace and compassion while addressing, through the arts, the hopes and problems of each community.

Peter Gold, the founder of Ancient Ways Project will be working with his global music events in consecration of the altars with the participation of local villagers and Buddhist monks.

In order to continue our work I am holding a number of events in my home here in Santa Fe, New Mexico. The first will be a salon recital, Spirit of Song, by Peter Gold the founder of Ancient Ways Project, to be held on Sunday, February 5th, 2012 at 3 pm. It is a celebration of Peter’s 50th anniversary of making music. My address is: 662 Alta Vista Street, Apt. D18 / Santa Fe, NM 87505 ( just east of St. Francis Drive. It will be the second driveway on your right at the sign  “Civic Housing.” Section “D” is at the back).

Since his initiation into world music during the urban folksong revival of the early 1960’s, and later in ethnomusicological field studies on three continents, Peter Gold has developed a virtuosic and spiritually-illuminating style of global vocal fusion music. His songs range from Native American, Tibetan and European traditional songs to the music of Bach, Beethoven, Ravel and Satie in  fusion with classic works of poetry.

Peter’s musical experience ranges from years of performing and teaching Western and traditional musical styles and instruments, and leading “Sacred Hootenanny” and “Spirit of Song” workshops, to directing folk choruses and recording two CDs of his songs. During a half century of musicmaking he also did anthropological work and activities under the aegis of his Ancient Ways Project.

I am happy to invite you to celebrate Peter‘s 50th year of musicmaking with an intimate and meditative, afternoon “salon” recital of his songs of illumination. They draw upon the world’s timeless music and poetics, as well as his own imagination in composing lyrics and musical themes.

There is no admission charge but donations are of course welcomed. A percentage of donations will be applied to World Wheel/Ancient Ways Project joint initiatives. Please RSVP regarding your plans to attend as seating will be limited. For further information please visit Peter’s website:  www.ancientwaysproject.org

On another exciting note, Peter and I will be leading a pilgrimage into Navajoland’s Canyon de Chelly and on the Hopi Reservation. I hope that you will join us from May 17 through the 23rd 2012. It is our offering toward a spiritual transition for the beginning of a new life of connectedness on this planet. Here is a description of our pilgrimage: 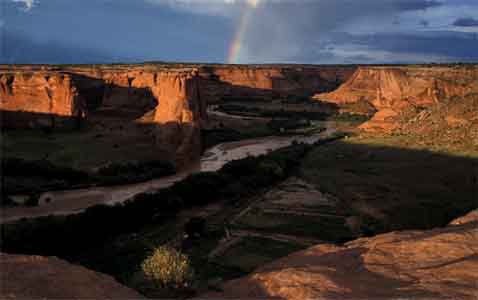 Join anthropologist, author and musician, Peter Gold and environmental artist, ceremonialist, and author, Vijali Hamilton on a special excursion in the Four Corners region of America’s High Southwest and into the ways of life, expression and spirit of the Navajo and Hopi Indian people.

From our base camp at glorious Canyon de Chelly (America’s second largest and perhaps most sublime canyon), centrally situated on the Navajo Nation, we meet artists, medicine people, herders and farmers, taste their Native foods and experience their sense of place, as we participate in their ways of life and spirit.

For the Hopi, the purpose of life is to exist in a healthful partnership with the universe leading to the marker of its success: maintaining an abundance of the staff of life, which is embodied in the spiritual metaphor of rain. For the Navajo, the universe exists in a dynamic state of balance called Beauty, a state that must be maintained within one’s own thoughts, expressions and actions via the Beautyway path of life.

In our quest for inner and outer rain and beauty, we live close to the Earth visiting sacred sites while our minds and spirits are released to soar skyward. We create works out of our deepest inspiration in various expressive media such as visual arts, essays, poetry, photography and song inspired by the vast land and lives of the Hopis and Navajos. Then, through communal ceremony we become infused with the useful inspiration which we each will have acquired on our pilgrimage.

In the process we are empowered by these wonderful people and landscapes to harness our inspiration, healing powers and knowledge in order to meet the challenges of life back home at this time of transformation on our planet.

(A note on the disposition of the fees for this trip. A major portion of the fees accrued on this trip will be going back into the Navajo and Hopi communities, both as honoraria for our presenters and fees for other individuals in their communities.) For more information please email:  vijali@worldwheel.org

Past Wisdom Journeys
World Wheel will support the late Mohawk elder, Tekaroniaken Jake Swamp’s vision of healing for indigienous peoples. I will have for sale my most recent sculptures and paintings, a group called Sacred Earth.

“Rekindling the Fire is a gathering of Indigenous Leaders in 2012 from the whole of the Americas. The gathering will take place on the banks of the Mississippi River in prayers of hope, love and healing so that we may return to our communities bringing a commitment to rekindle the path of our ancestors.” (Vickie Downey)

Vijali went to Australia on 30 May – 16 July 2010 escorted by Indigie Femme. They concentrated on going into remote and regional areas in Queensland and Northern Territory.

Vijali conducted a Ocean Rainbow Spiral Prayer for the waters around Magnetic Island, worked in several remote Aboriginal communities, went into detention centers, as well as shared her short film, ‘One Woman’s Quest for World Peace.’

Below was their itinerary of where they went.

I have thought of you so often since my last newsletter and am happy to be in contact again. I feel we need to do all we can at this difficult time on the earth, each one of us in our own way, to bring healing, harmony and peace into our lives, country and on the planet. I am leaving for Ecuador on June 9th after showing my new film World Wheel, One Woman’s Pilgrimage for Global Peace at the EarthWays Foundation in Malibu, California June 3rd at 7:30 pm (email me if you need directions).

I will be taking people on a pilgrimage to the Andes, July 7th, and then into the Amazon rainforest of Ecuador, July 12th. I will continue on into Brazil, the next country of my second World Wheel. This will start in Iquitos at the headwaters of the Amazon River. Here I will bury an urn filled with sacred objects, which was created in Tibetan Monasteries, to bring harmony and healing to the earth.

It was made under the direction of Charok Rinpoche, a Lama who lived in a cave in Nepal his whole life until he passed away at the age of 107. He gave these vases  to Cynthia Jurs, a Buddhist teacher, in answer to her question, “How can we heal our planet?” Instructions were also given to bury the vases at strategic places on the earth. In ceremony, I was given one of these Earth Treasure Vases.

I encourage you to come on pilgrimage as a way of seeding peace in ourselves and on our planet.

Here is my schedule for this year:

July 7th-13th
Pilgrimage for Peace in the Andes of Ecuador

If there is anything else you need to know just email me. I will be away from my phone after May 26th.  I so look forward to spending this time with you and having the opportunity to share these sacred places and inspiring people.

Vijali Hamilton, Earth Artist, Poet, Healer: From North Amerca, Vijali brings the vision of the Eagle. We will join her as she creates her World Wheels from elements of nature. These environments become sacred space for ceremony in order to restore our equilibrium and release our innate wisdom. Vijali has a Master’s Degree in fine arts.

She spent 10 years as a Hindu nun in the Vedanta Convent. In 1975, Vijali had a vision of all life as one borderless ocean of energy-consciousness. In a dream she was shown the form of the World Wheel in which she would circle the planet creating stone sculptures and community ritual performance. It has now become an artistic forum for global understanding. She has dedicated the rest of her life to bringing this vision of peace into our world.