Return To Harmony — Surprises from the Universe
Kunming, Southwest China 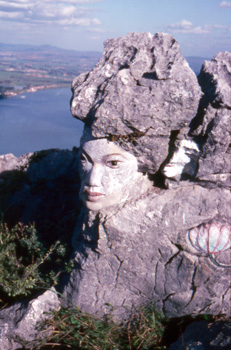 I arrived in Kunming, Yunnan Province, in southwestern China by train with one telephone number to contact. Allen Ginsberg had given me the name of a professor at the university in Kunming. When I called her, the professor invited me to show my slides and talk about the World Wheel with students and faculty. I was warned by the students there not to work in a public place because it could take years to sort through the  bureaucratic red tape and obtain permission.

Within 72 hours I received a call from Chinese officials who requested an appointment. I was sure that my outspoken concern for the Tibetan people must have gotten back to the government and I would be ordered to leave the country. When the day came and two officials arrived, I was told, “We have heard about the World Wheel, the world family you are creating, and we want to know in which national park you would like to do your work.” I was stunned!

I chose Xishan Forest Park, an ancient Taoist enclave near Kunming, which literally means “Eternal Spring.” I carved six sculptures in a massive outcropping of limestone on a hillside overlooking Lake Dianchi. Peering out from stone cliffs were three large faces as homage to the two-dozen local ethnic groups, which had been brutally suppressed during the “Cultural Revolution.”

These carvings also sought to convey images of ordinary people as reflections of the divine goddess, Quan Yin. One sculpture stands out most beautifully with the natural twisted strata of limestone as her headpiece and the expanse of the lake behind her. Another sculpture was painted in gradations of blue, like the sky, as if the stone, representing ourselves, was opening into its nature of spaciousness. She was holding a lotus flower – a symbol of peace.

The performance ceremony entitled “Return to Harmony,” involved around thirty participants and was televised nationally. Children wrote their answers to my three questions on a long scroll, while Naxi musicians and several musicians from the faculty of Kunming University played instruments.

Martial artists performed a sword dance representing their time of division (when society was divided between royalty and peasants). In recognition of the common ground of our humanity, we concluded by burying a stone that had been blessed by the Dalai Lama, along with earth from all the previous World Wheel sites.