One Body, One Mind, One Heart — One Global Family 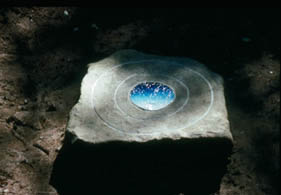 As I traveled in Japan, I carried a book in which I asked people to write their answers to my three questions. One person answered, “Now-a-days there is a trend to think people can control everything and that we are superior to other forms of life.  It would be better to touch nature — mountains, trees, seas, feeling ourselves as part of nature.”

In most countries I had visited, I was lucky to have a telephone number to call when I arrived. I usually lived with people of a particular place in an everyday kind of situation for several months while I did my work. Japan was different. Dominique Mazeaud, an artist and curator from Santa Fe, New Mexico, pre-arranged our itinerary. Our final destination was Tenkawa, an ancient Shinto shrine in the mountains of Nara Prefecture, which honors Bensaiten, the goddess of arts, wisdom, and water.

I carved twelve river stones with patterns found in nature that represented the twelve countries of the World Wheel—the spiral, double helix, and so forth. For Japan, I chose “Concentric Circles,” a symbol of closure and synthesis for the seven-year World Wheel pilgrimage. But heavy rains that day jeopardized our planned outdoor ceremony.

Two hours before we were supposed to begin, the head Shinto priest in Tenkawa invited us to hold our ceremony in a beautiful renovated temple. We brought the twelve stone carvings and recreated the wheel inside the Shinto shrine. The priest in flowing white robes added a concentric ring of candles and cedar branches.

We commenced a fire ritual by the Priest chanting and beating on a giant Shinto drum. I stood in the dark at the center of the circle all in black with my face painted as emptiness — an open blue sky — and then began to dance. At the end of the ceremony, we buried a stone that the Dalai Lama had blessed. The next day the twelve stone carvings were placed around the Crystal Mountain Shrine as a permanent installation.

The closing 24 hours of the World Wheel pilgrimage came about without a conscious plan on my part. Its completion was honored by the support and participation of the Shinto priest and by his wish to have earth from the other World Wheel countries mix with the shrine’s sacred ground. A seed of peace was planted. It was an affirmation of the essence of the World Wheel pilgrimage: the unity of our earth family, of all people, animals, plants, stones, water, and soil coming into the wheel as one body, one mind, one heart.