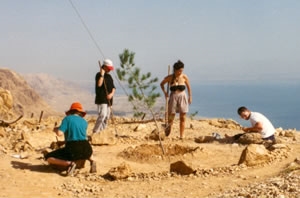 I arrived in Israel a few weeks after Iraqi troops invaded Kuwait, and  left shortly before the onset of the Gulf War. Caught in tear gas attacks many times while visiting Israel and Palestine, I often heard the crackling of gunfire.

Amidst ongoing terror and bloodshed, I lived with both Palestinians and Israelis. Befriended several people whose family members had been seriously injured, I tried to be supportive during this difficult period.

At the House of Hope, a center of education for peace where Palestinian, Druse, Israeli and Christian children study together, the children gave the answers to my questions: “If we can look through the eyes of someone from a different culture, we can understand them and then we can love each other. This can bring peace.”

Eight people worked with me to create a circle of twelve stone sculptures on a craggy cliff overlooking the Dead Sea – the lowest place on the earth¹s surface. On the day of the ceremony, a Palestinian child and an Israeli girl planted the “Tree of Peace” in the center of the circle. Two hundred people — Jews, Christians, Muslims, Drews, and atheists — participated in this life-affirming ritual, which was followed by exuberant song and dance. Children played and adults laughed, as they celebrated each other’s culture.