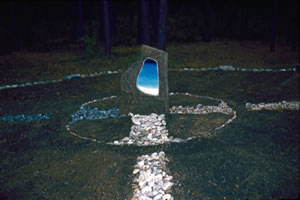 In Siberia I stayed in Buryatia with the Buryat people, who are of Mongolian decent. The beauty of this area with its forests and lakes, and the vitality and spirit of its people are unknown to the world at large.

I chose an area for the World Wheel site where the dark forest grows right next to the luminous banks of Lake Baikal. I wanted to draw attention to the ecological problems of this very important lake, which holds almost a quarter of the world’s fresh water.

Now factories are polluting the water and killing indigenous species – a legacy of industrialization that began during the Communist era and continues to ‘wreak havoc’ on the land. A food shortage has made life very difficult in Buryat, and people are struggling to raise themselves out of an economic and psychological depression.

Three men from Maxhimiha, a tiny village on the east bank of the lake, helped me move stones from the river to the site. The Buryat children sang their traditional songs as we positioned the small colored rocks. They are proud of their language because they have only been allowed to speak their native tongue and learn about their culture since 1990.

The earth wheel was created with twelve stones representing the 12 World Wheel countries, on which I carved patterns found in nature.  The center stone was upright, with a luminous sky painting in its center. It gave the name to the piece, “Light Within Darkness” – like a doorway of hope that draws us through the dark into an open luminous space.

Around it we placed stones to form the Russian Orthodox cross. I wanted to integrate the shamanistic culture of the Buryats with the Russian. Unexpectedly a local television crew from the Buryat Capital showed up for the ceremony. Many of the people who came were artists, writers, directors, and Buryat healers who had been underground because of the Cultural Revolution.

They now had a voice on television answering my three questions as we passed a talking stick in the Native American tradition. Each person spoke about his or her problems and possible solutions as we stood around the wheel.

Many spoke about this difficult time when there was not enough food and they were not able to raise themselves out of depression. The World Wheel had given them an incentive to start grass roots organizations to help the people around them and to bring hope into their lives.

One composer answered, “I think that those three questions are connected. What combines them is the search for harmony—firsts of all in ourselves, then as part of a universal order. A person who finds the harmony in himself opens the harmony of our universe.”