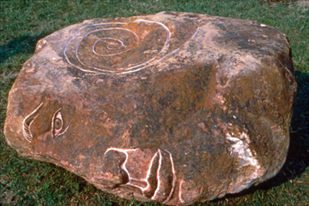 Before I set off to other continents, I felt it was important that native culture as well as occidental culture in North America be represented as part of the World Wheel. It was a great honor when my dear friend, Grandmother Twylah Nitsch (“Yehwhennode” or “Two Wolves”), an elder of the Seneca Nation I had known for many years, invited me to bring the World Wheel to the Seneca Reservation in Upstate New York.

Outside of her medicine lodge, I carved a very hard granite stone 5’x 4’x 4’with embedded crystal. Using a hammer and carbide-tipped chisels, I chipped away, day in and day out, until a piece called “Unity” was finished. Sitting on a green lawn in front of Grandmother Twylah’s lodge, the sculpture had four faces looking out at the cardinal directions from all sides of the stone, and a spiral on the top, which drew all cultures together into one planetary family. The sculpture reflected Grandmother Twylah’s universal view of truth, which included all races.