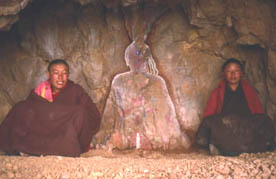 Two American women joined me on my pilgrimage to Tibet. My destination was Shoto Terdrom, a 16,000 feet high valley surrounded by spectacular mountain peaks covered in snow. Buddhist nuns live as hermits in one of Tibet’s most beautiful and sacred places.

The area was filled with historic caves in which Padmasambahva, an Indian adept who came to Tibet in the eighth century and established Buddhism, and his companion, Yeshe Tsoygel, lived for a time. The sound of chanting nuns ushered in each morning no matter how severe the weather.

Buffeted by snow, hail, and lashing rain, my little tent clung to the side of the hill as wind ripped through our campgrounds. After the storms subsided, the nearby hot spring that bubbled out of the frozen ground was a most welcome and rejuvenating gift from the earth. The mineral waters of these amazing hot springs were known to cure the ailments of the yogis and yoginis who practiced meditation in the area.

We found an unoccupied cave and I went there everyday to meditate before I began carving with hammer and chisel. I carved and painted an androgynous figure embedded on the cave wall filled with prisms of color, and seated in the lotus posture. I wanted an image that did not represent any religious tradition, but was the spiritual essence of all of us. The result was “Rainbow Bodhisattva.”

This pulsating ‘larger- than- life’ size human form was filled with prisms of rainbow colors. A streak of light beamed from the third eye of a featureless face, which sat atop a cross-legged torso made of red clay found in the cave. The body was literally the earth itself, and the crown of the head extended into sky.

The very day I was putting the last touches of paint on this figure and packing my tools, two Buddhist nuns came by gathering herbs. When they looked into the cave, their faces blushed and they immediately burst into tears. As they threw themselves down in a full-length traditional prostration, I knew I had achieved what I had hoped. Afterwards, they took me to their cave hermitage and shared their most precious practices with me for several hours.

When I queried the elder nuns, they responded to my three questions by saying, “We are from this earth, Tibet. Our problem is that we as people have been expelled from our sacred land by the Chinese. Many of us died from starvation while hiding in the mountains. Our solution was to eventually return to the earth we love the most.” At the end of our stay, we created a ceremony that entailed burying a stone blessed by the Dalai Lama, Tibet’s exiled leader, along with earth from all the previous World Wheel countries.